Thomas Pownall: the most famous visitor from America to Newgrange

Thomas Pownall (1722–1805) was a British politician and colonial official who served as the Governor of the Province of Massachusetts Bay (modern Massachussets & Maine, and the Canadian Provinces of New Brunswick and Novia Scotia) from 1757 to 1760, and later as an MP from 1767 until 1780. He is now mainly remembered for his work in America where he advocated in favour of the colonies, in particular opposing Parliamentary efforts to expand taxation and attempts to quarter British troops in private homes, both of which would ultimately lead to rebellion and war.

First arriving in 1753, Pownall travelled the colonies for two years, collaborating with the prominent map-maker Lewis Evans, who dedicated his map of 1755 to Pownall. He was appointed Lieutenant-Governor of New Jersey in 1755 and then (following slightly disreputable political manoeuvring) governor of Massachusetts in 1757. During the Seven Years War, he failed to relieve Fort William-Henry and prevent the resulting massacre, but was commended by William Pitt for his work raising the Massachusetts provincial militia and both proposed and directed the construction of a fort named after him on Penobscot Bay.

He is also the namesake of the towns of Pownal, Maine and Pownal, Vermont, while Dresden, Maine was once named Pownalborough in his honour and the Pownalborough Courthouse, built in 1761, still bears his name. He opposed military interference in colonial administration and had a generally positive relationship with the colonial assembly. On returning from America he served in the military commissary's office in the Electorate of Hanover, until the war ended in 1763 and on his return to England he continued to write on colonial affairs, publishing several different works on America including The Administration of the Colonies which proposed the creation of an imperial parliament for both Britain and the Colonies.

In spite of his sympathy with the colonists, Pownall supported Lord North’s administration during the American War of Independence although he ultimately came to favour peace with the American Colonies in order to focus on the war with the French. Following the War, Pownall became a prominent supporter of free trade and supported the resumption of friendly relations between Britain and the United States.

In addition to his political and economic writings, Pownall was prominent as an antiquarian. He was elected to the Antiquarian Society of London in 1768 and was a regular contributor to their journal. In common with many of the antiquaries of his day, Pownall believed that agriculture, cities and civilisation had been spread from the Middle East outwards by the Phoenicians, supplanting the earlier forest-men who we would describe as hunter-gatherers and who Pownall believed were the origin of the term Celt. He argued that the Druids described by Caesar were the successors of this earlier, Phoenician civilisation and had maintained its religion and many of its technological advances while denying them to the common people. 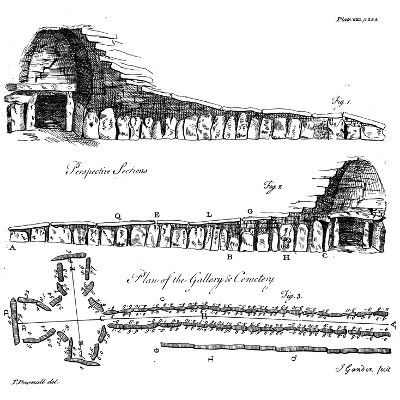 Following a visit to Ireland in 1769, one of the earliest antiquarian accounts of Newgrange, a letter of Pownall’s entitled A Description of the Sepulchral Monument at New Grange, near Drogheda, in the County of Meath, in Ireland. By Thomas Pownall, Esq in a Letter to the Rev. Gregory Sharpe, D. D. Master of the Temple was read to the Society of Antiquaries in 1770 and subsequently published in Archaeologia. Earlier descriptions of the monument had been published by Lhwyd and Molineux but Pownall commissioned Samuel Bovie, a local land-surveyor, to re-measure the mound, correcting Molineux’s mistaken estimate of the height as 150 feet.

Pownall sections of Newgrange illustrationPownall believed that the mound had once extended out as far as the “great circle”, ten of whose stones were still present at the time of his visit, although one had fallen, but could not see any evidence of the “great stone” which Lhwyd had described as sitting on the summit of the mound. He correctly realised that the standing stones, some 11 ft in length, must have been brought from the sea coast and noted that the mound had long been used as a stone quarry for the local roads, leaving a hollow in the mound which he recorded on his plan. Entering the mound, he described the passage to the inner chamber as it appeared in the late 18th century:

THIS gallery at the mouth is three feet wide, and two feet high. At thirteen feet from the mouth it is only two feet two inches wide at the bottom, and of an indeterminate width and height. Four of the side stones, beginning from the fifth on the right hand, or eastern side, stand now leaning over to the opposite side; so that here the passage is scarce permeable. We made our way by creeping on our hands and knees till we came to this part. Here we were forced to turn upon our fides, and edge ourselves on with one elbow and one foot. After we had passed this-strait, we were enabled to stand; and, by degrees, as we advanced farther, we could walk upright, as the height above us increased from fix to nine feet.

Within the main chamber itself, Pownall described the interior with its three niches containing concave stone bowls and saw what he believed to be traces of writing.

EXAMINING very narrowly, with a candle in my hand, all the parts of this cemetery, I discovered on the flat stone which forms the north side of the left hand niche, what I took to be the traces of letters. Their form is given in the wooden cut annexed. These lines were of a breadth and depth in which I could lay the nail of my little finger; and of different lengths from two to six inches. I tried for some time to assign, if possible, these letters to some known alphabet, by comparing them particularly with that of the Beth-luis-nion [the ogham alphabet], or old Irish alphabet; but this produced nothing satisfactory.

As I had continued in this cave a much longer time than was prudent, by which I caught a violent illness; and as the tracing these lines with greater accuracy would take up more time than I could then give to it; I gave over the task, referring it to be done at leisure by the surveyor, whom Dr. Norris was so good as to engage.

Comparing the wood-cut which he had received from Bovie to known ancient alphabets including Cadmean and Egyptian inscriptions Pownall mistakenly attributed the faded inscription to the Phoenicians writing that:

I have persuaded myself, that this inscription is Phoenician, and contains only numerals; that being, as it now stands, a vacant series of numerals, without reference to any particular epoch or aera, or other circumstance, the stone on which it is cut is a mere fragment; that this fragment is of more ancient date than the building wherein it is found; and that it was brought hither, and used in the structure of this tumulus, without any knowledge of or regard to any characters cut upon it… I am inclined to suppose there may have been, ages before this Barrow was erected, some marine or naval monument erected at themouth of the Boyne, by some of these Eastern people, to whom the ports of Ireland were well known; that this monument, through the course of events and time, fell into ruin, and that these ruins were collected amongst the rest of the shore-stones with which this Barrow was constructed, and so was intermixed, and became part of it; that the peculiar and secreted situation of this stone became a peculiar means of its being a singular Instance of the preservation of the only eastern or Phoenician inscription found in these countries.

He also left one of the earliest descriptions of the tomb’s distinctive artwork, comparing it to Danish carvings:

BEFORE I close this description, I would just observe, that there are on some of the stones which form the sides and backs of the Kistvaens (a rectangular stone burial chamber), lines cut in a spiral form. In the front edge of one of the stones which form the top of the Kistvaens there appear some lines forming a kind of trellis-work, in small lozenges, such as are not unfrequently seen on Danish monuments and crosses.

Whereas Lhwyd had earlier recognised that Newgrange was the work of the ancient Irish; Pownall, like Molineux before him, had read descriptions of Danish barrows superficially very similar to Newgrange by the Danish antiquary Olaus Wormius, and suggested that the mound was of Danish construction although he acknowledged that there were sufficient differences, in particular as the Danish mounds were built of earth rather than stone, to leave this conclusion open to doubt, and he also compared Newgrange to the Egyptian pyramids.

Pownall Newgrange main chamber illustration Pownall’s work was conducted in the very first phase of scientific archaeological and historical research and few of his conclusions have stood the test of time. Its value lies in his detailed descriptions and in the accompanying illustrations which give us our only view of the monument in the late 18th century, after the tomb had been opened but before any of the restoration work conducted by the State from the late 19th century onwards. His final words give some sense of the mystery of the mound and its builders which hangs over Newgrange to this day:

When one considers the multitude of hands, the length of time, the boundless expence, which conspired to form this stupendous monument; when one reflects on the transparent spirit of ambition, which formed the idea of this great and simple magnificence, dedicated to the memory of some great person; one cannot but repine at the caprice of fate and fame; that while one sees the magnificence, one finds that the name, which it was to perpetuate, is gone. Such is glory, when it is past; such is fame. One sees the traces of something great and active having passed by; but the thing itself is gone, and is no more known. Its glory was a momentary vision; and the fame of it, like the baseless fabrick of that vision, is dissolved.

Strictly necessary cookies
These cookies are essential for visitors to be able to browse the website and use its features. None of this information can be used to identify visitors as all data is anonymized.

Currency
Purpose: To be able to show prices in the currency matching the visitor's preferences.
Duration: 30 days.

Google Recaptcha
Purpose: To be able to validate whether the visitor is human and to limit the amount of spam from contact forms.
Duration: 1 year.
Provider: Google.


Third-party cookies
These cookies collect information about how visitors use the website, like which pages they've visited and which links they've clicked on. None of this information can be used to identify visitors as all data is anonymized.

ga
Purpose: Registers a unique ID that is used to generate statistical data on how the visitor uses the website.
Duration: 1 year.
Provider: Google.

gid
Purpose: Registers a unique ID that is used to generate statistical data on how the visitor uses the website.
Duration: 24 hours.
Provider: Google.

We also integrate with social platforms on this site that allow you to connect with your social network in various ways. Social media integration will set cookies through the website which may be used to enhance your profile on social media sites or contribute to the data they hold for various purposes outlined in their respective privacy policies.